When it comes to cocktail competitions there are a few things you might expect to see. Knowledge of the brand and the liquid for instance. A mystery box challenge is a good one. Calmness under pressure says a lot about the competitors too. And, of course, some outstanding drinks should be a given. Buffalo Trace though recently took things to an altogether different level by combining all of these and a whole lot more in unique fashion for the London heat of its Buffalo Trace Mystery Migration Cocktail Competition. It certainly took the bartenders well outside their comfort zones. Big time.

Representing six bars the bartenders assembled at the Pink Chihuahua beneath El Camion in Soho for the right to get on the flight to Kentucky and a visit to the home of Buffalo Trace. Stepping up were Michael Ball from Dandelyan; Mihai Cosmic Ababei from Berners Tavern; Ben Flux from The Folly; Oliver Kritzler from Milk & Honey; Jay Rivera from Jamie Oliver’s Fifteen and Ash Straney representing The Four Sisters.

They may have assembled at the bar but they weren’t there for long because this was just the start of a very testing journey. And that was before they even got to start mixing up their cocktails. We’re used to seeing a mystery box of ingredients for bartenders to create a new cocktail on the spot, but this version was particularly challenging. Here’s how it worked.

Each of the competitors was handed an envelope containing a clue and a list of possible venues that said clue could take them to. Amongst the venues were top bar Milk & Honey, legendary whisky destination Milroy’s of Soho and everyone’s favourite liquor store, Gerry’s. Then there were the challenges…

At Milk & Honey the bartenders had to answer a handful of questions about Buffalo Trace. Fair enough. But they had to do so whilst smoothly operating one of those old fairground attractions that require you to pass a metal loop along an electrified wire. Should the two connect, off went the alarm and they were out. Bartenders’ competition shakes definitely took on a whole new meaning with this one.

Meanwhile over at Gerry’s the task was to identify the location of various Buffalo Trace warehouses within its set up. And by location we mean they had to pinpoint the exact spot, so the bartenders really needed to have done their homework.  The bartenders’ palates were also put to the test in the form of a blind tasting. Four whiskies, including Buffalo Trace, were placed side by side in plain glasses for the bartenders to identify from colour, aroma and taste. And back at El Camion the task was to identify photos of various Buffalo Trace distillers and place them in the correct time period for when they were plying their craft.

So how did the bartenders do? When it came to presenting their drinks it wasn’t surprising that the Buffalo Trace cocktails which had secured them their places in the heat in the first place were pretty great across the board. The mystery challenge cocktail though was an altogether much more complicated affair. Having chosen their secret ingredients, good and bad, they had just 40 minutes to create their serves.

There were a few standouts. Michael from Dandelyan produced an elegant sour which highlighted the Buffalo Trace nicely with beetroot and peach. Ash from The Four Sisters created a delicious mix of peanut butter and blackcurrant, and blackberry infused Buffalo Trace, topped with a peanut butter sandwich garnish. One of the most visually stand out drinks came from Mihai from Berners Tavern, who presented a combination of chilli sauce, orange juice, beer and Buffalo Trace in a beer bottle concealed in a brown paper bag. Ben from The Folly produced a particularly tasty Old Fashioned with bacon washed Buffalo Trace and and maple syrup. And Oliver from Milk & Honey mixed up a delicious punch with milky oolong tea, lemon juice, orange juice, bitters and Buffalo Trace. Jay from Fifteen meanwhile twisted a Manhattan to good effect adding beetroot and balsamic vinegar to the Buffalo Trace.

It was never going to be an easy decision for the judges – Adam Marks from Hi-Spirits, last year’s winner Oliver Cush and The Cocktail Lovers. They gradually whittled down the contenders though with the place on the plane going to Jay Rivera from Jamie Oliver’s Fifteen. Having done exceptionally well on the mystery challenges (maximum marks for knowing his Buffalo Trace distillers) he also went on to deliver two outstanding drinks.

“This year’s challenge pushed bartenders more than ever, testing their knowledge as well as presentation and improvisation skills”, said judge Adam Marks, “and Jay was a worthy winner in a very close competition”. As for us we particularly liked the way Jay had clearly put in the time to understand the nuances of Buffalo Trace and appreciating its history, as well as mixing up a couple of delicious drinks.

For Jay it was clearly a big day. “It was breath-taking, heart-pounding, stupidly exciting, amazingly well organised and a really on-your-toes competition. The event upped the standards in every aspect, it’s no wonder why every bartender has their eye on this competition each year, it reminds us why we love what we do and the importance of the history and the heritage of Buffalo Trace.”

Good work Jay. Enjoy your trip. At least when he joins ups with the winners from the other heats in Kentucky he’s in for a relaxing time… 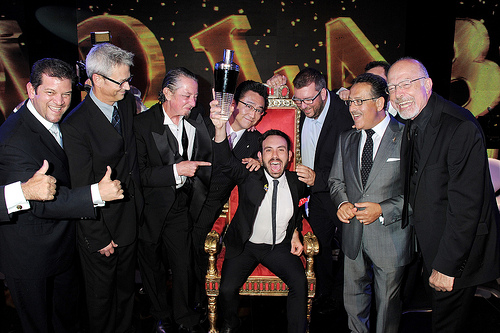 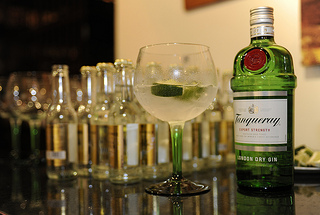