There were so many things to love about this year’s Chivas Masters Cocktail Competition. Hosting it in Shanghai set the tone for a start. Come on, when was the last time you heard of a major drinks brand staging its global finals in China? Let’s help you out there… There hasn’t been one, a fact that automatically gave this competition the edge. Then there was the way the contest had been devised. Cleverly divided into two distinct sections, one focused on individual skills, the other on brotherhood, or working together as a team, both parts were equally weighted to enrich the 15 finalists careers. 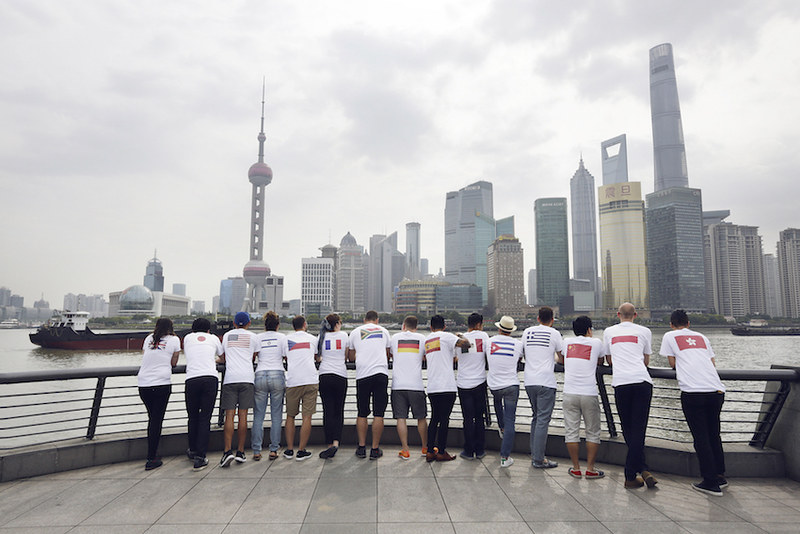 It started with a game of sorts. The all-important Shanghai Experience. Here’s where the group was split into three teams together with their respective hosts and a local guide from Pernod Ricard China who would help them negotiate their way around. Armed with a map of a small section of this dynamic city, each group was charged with completing as many of the eight designated tasks as possible.

Was it fun? You betcha. Did it bring out a competitive streak in all those taking part? Yup, it did that too. But more importantly, it was a chance for the bartenders who had come together from every which where (Germany, Greece, Czech Republic, Cuba, Mexico, Japan, USA, UK, Spain, France, Poland, Israel, South Africa and a little closer, Hong Kong and China), to get a chance to bond over missions such as taking photographs of the group flipping coins into the urn at the Jing’An Temple and documenting being at the Marriage Market at People’s Park. This was the first insight into who were leaders, who were creative thinkers and those who could get the job done.

After a dim sum lunch that included everything from chicken feet to cows stomach (yes we did and no it wasn’t), it was back to the Long Bar at the Waldorf Astoria to get cracking with the action-packed show.

Like we said, this was a competition where every teeny detail had been put together with the bartenders progression in mind. Which is where the expertise of the judges came in. Not only were Chris Lowder, Dre Masso, Leo Robitschek, Naren Young there to evaluate the execution of the drinks and presentations with their superior bar knowledge and collective experience, they each led a specialist workshop that, if adhered to, would help the finalists polish off their presentations to perfection.

Chris Lowder was up first. As a former actor, translator, improv comedian and all-round nice guy to boot, he was fully equipped to deal with the performance side of things. Mind you, having worked at both the NoMad and Eleven Madison Park, and now managing 11 bar programmes at the Four Seasons, he’s no slouch on the drinks front either. 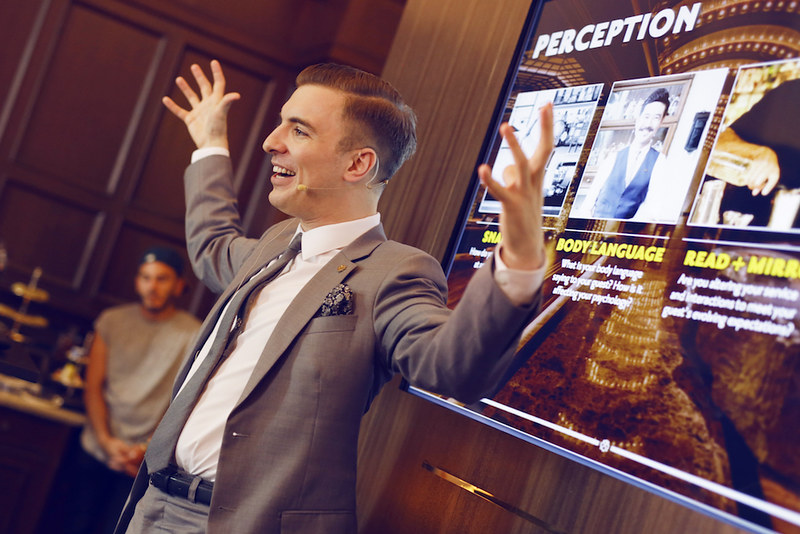 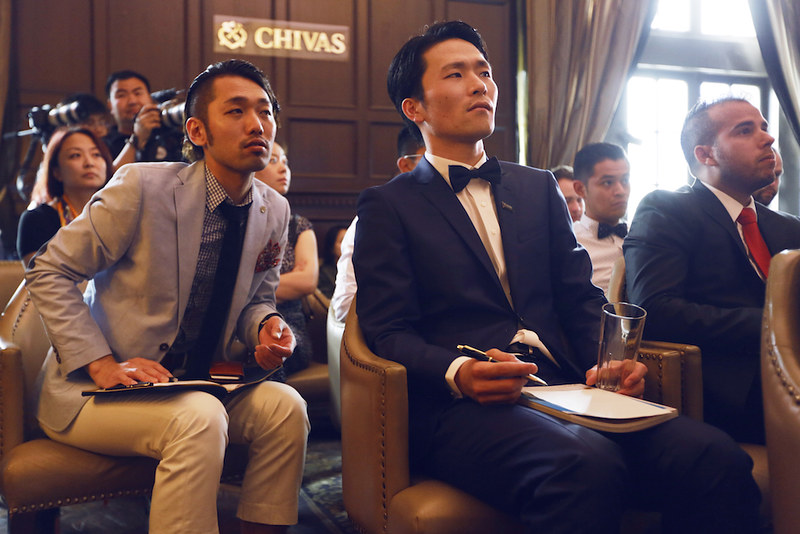 Chris brought his personable nature together in a captivating workshop that looked at how the bartenders could amplify their personal style to nail a winning presentation – both in the bar and during the competition. It took in everything from the importance of setting the right mood in the bar and thinking about how it looks at every moment – through to how tone of voice, body language and word choice come into play in the profession and how bartenders should alter the style of service depending on who is sitting at the bar.

Chris’s top tips:
Set the right tone/mood
How is your body language affecting your psychology?
Fake it until you become it
Feeling anxious? Think the power of four: breathe in for four, hold for four, exhale for four
Adopt an open pose and smile
Change content of what you’re saying to get your message across

Over to the bartenders, challenge one:

Then it was time for the bartenders to dust down their bar tools and show how they beat off the competition in their respective countries. Mindful of the fact this was the first time they would present, not just to the judges but in front of each other, the first drink they had to create was one they felt comfortable with, their Local Way cocktail. This was the drink that told a story about their homes and earned them their ticket to Shanghai. However, there was one small difference. Here, like all of the challenges to come, the judges were looking to see who had incorporated elements of the workshops into their delivery. In this particular case, that could take in adopting an open pose and smile, mirroring the judges, changing the content of their presentation to fit the mood of the room. All very exciting stuff.

Day 2: Keeping it local, food pairing and the finer parts of service 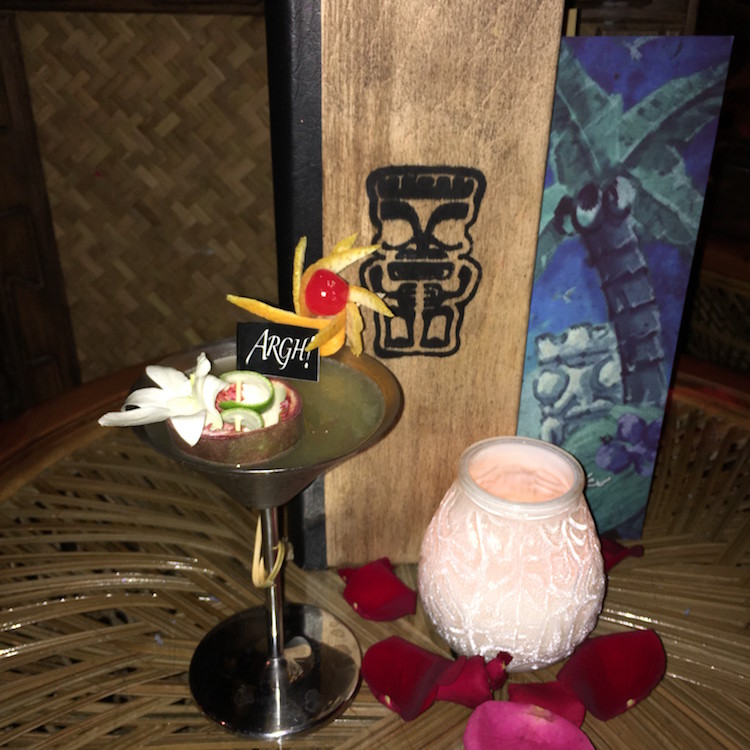 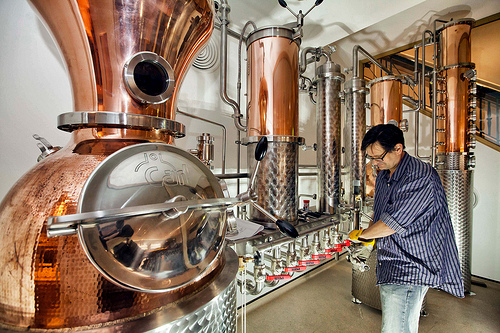 The City of London Distillery gets ready to open for business 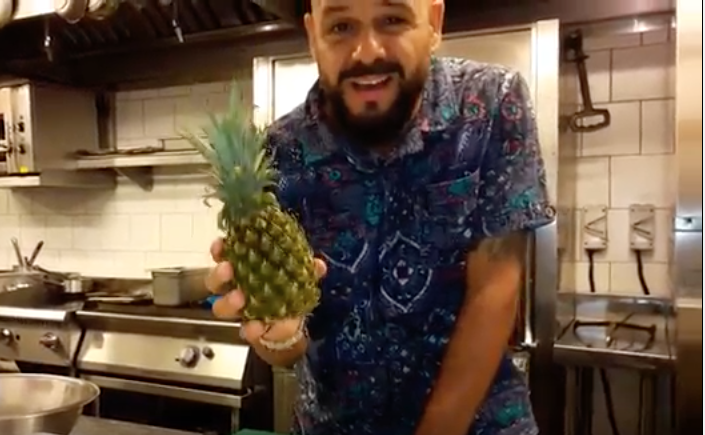 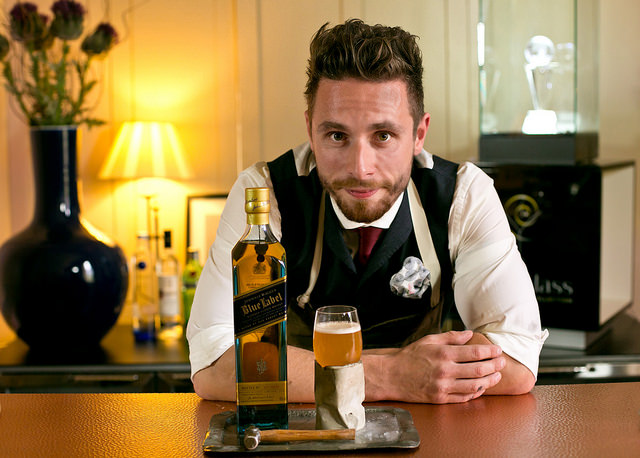