Don’t tell anyone but as much as we thoroughly enjoyed all five of the Patrón Perfectionists UK heats, the Global Final outshone them all. Oh come on, we were in Mexico home of super-premium Patrón for goodness sakes. And even if it hadn’t been a very agreeable 27 degrees while we were there (compared to a miserable and drizzly one degree when we left Blighty), we would have still been won over by the immaculate setting and the opportunity to sample drinks from some of the best bartenders in the world, more of which later. 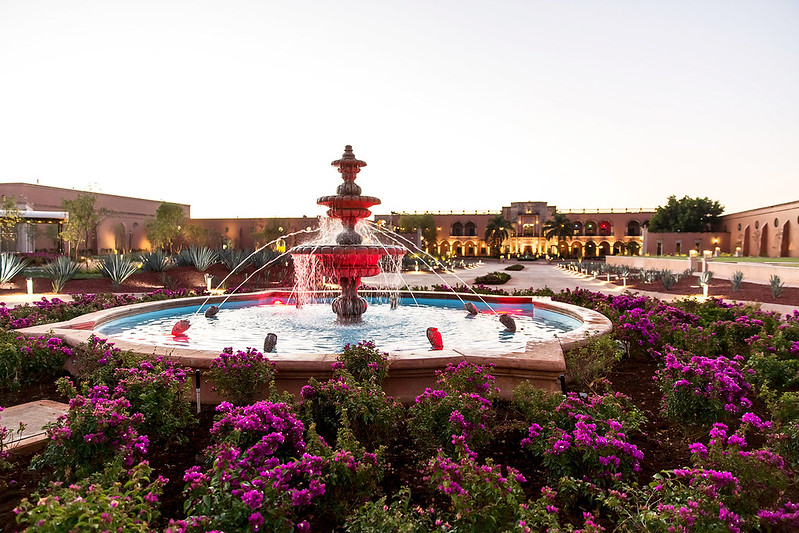 Before that, can we just take a moment to talk about the many wonders of Hacienda Patrón? This isn’t us being obsequious – we honestly can’t praise the delights of this place highly enough. Last year when we visited for the first time, our gobs were literally smacked by the thought, care and attention lavished on every aspect of the distillery; from the beautiful gardens and peaceful chapel to the environmental areas and intricate design of the Spanish Colonial-style building itself. No wonder everyone seemed so happy and proud to be working there.

At the time construction had started on another chapter in the Hacienda story – a brand new building designed for specially invited guests to stay and be entertained in Patrón’s inimitable style. With that in mind, we knew it would turn out to be something special – if we’ve learned anything about Patrón, it’s that they don’t do anything unless it can be executed to perfection. Not just the showy bits you see on the surface but all of the teensy-weensy touches that transform it from something good into a truly outstanding experience. Think six-star accomodation and service with knobs on. 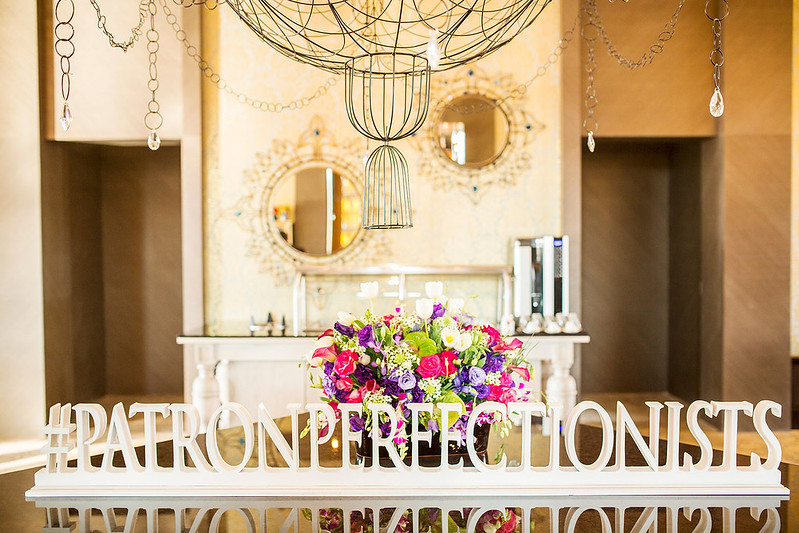 The Patrón Perfectionists competition falls into the fold very nicely thank you very much. Like the recent addition to the Hacienda, it’s been built on a solid foundation and has sprung into life in glorious fashion in the last 12 months. Back then the contest was strictly a UK affair, now Australia, France, Italy, Mexico, Spain and UAE have joined the party. And don’t let its young age fool you into thinking it doesn’t have grown up intentions – this competition is definitely one to watch.

We were privileged to be invited to sit on the judging panel along with the big guns at Patrón: Lee Applbaum, Chief Marketing Officer, Stephen Halpin, Trade Education & Mixology Manager and David Rodriguez, Production Director, keeping us on our toes. Luckily, we had seven wonderful narrators and equally beguiling drinks to engage our minds and stimulate our senses, all put at ease and introduced to the judges and guests by the wonderful David Alan, Manager, Trade Education & Mixology. 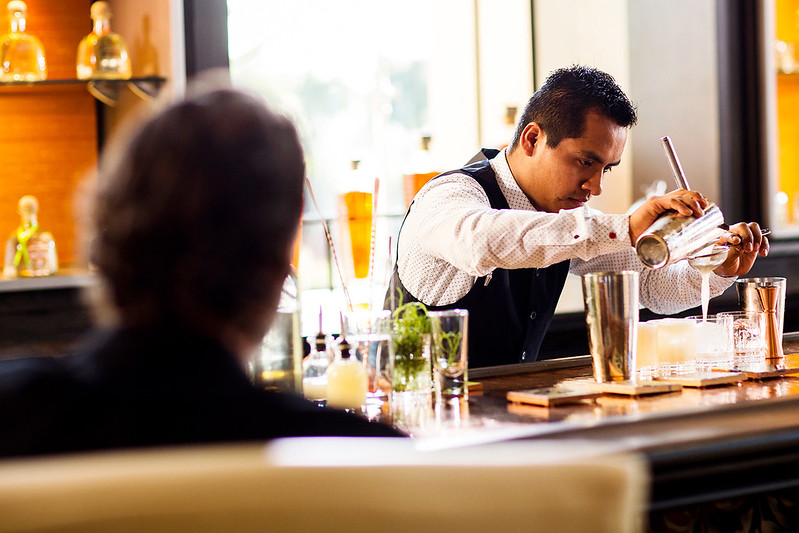 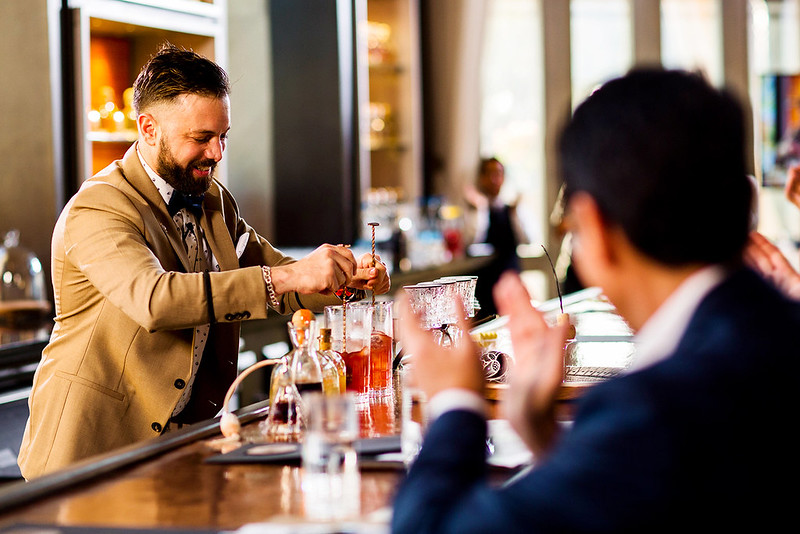 Marcario Vazquez from Mexico was the ideal person to get proceedings underway. Sure, he was on home turf but it was his quiet confidence, warm smile and easy charm that shone through. His drink Augurio (Patrón Añejo, Ancho Reyes Verde, pipicha grass from Wahaca, simple syrup, egg white and aromatic bittters) was inspired by the flavours of Mexico which was further enhanced by serving on rustic local tiles.

Fernando Fastuca representing Spain followed with El Pacto which was influenced by the pact Patrón make with the environment and the people who work at the Hacienda. Each judge was handed an envelope containing the pact Fernando was making with us through his seductively smoky cocktail made using Patrón Reposado, Martini Rubini, Almibar syrup, roasted pineapple, Ancho Reyes Ancho Chile Liquor with canela and green cardamon. 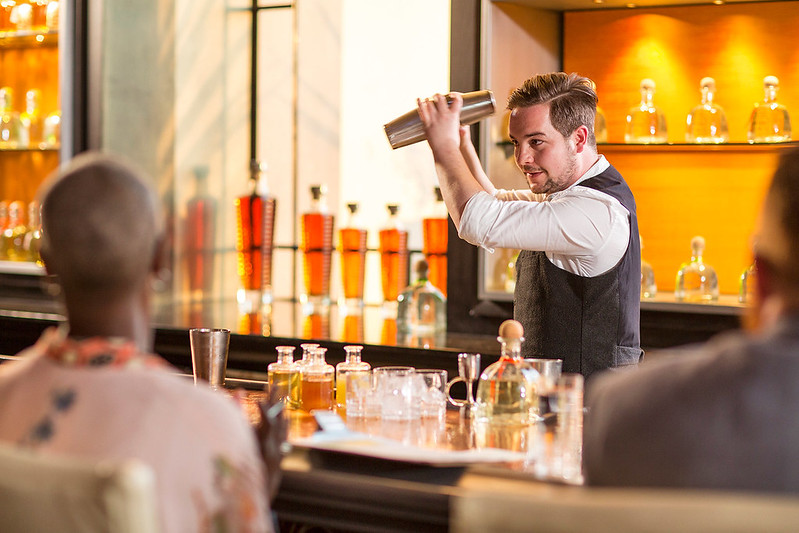 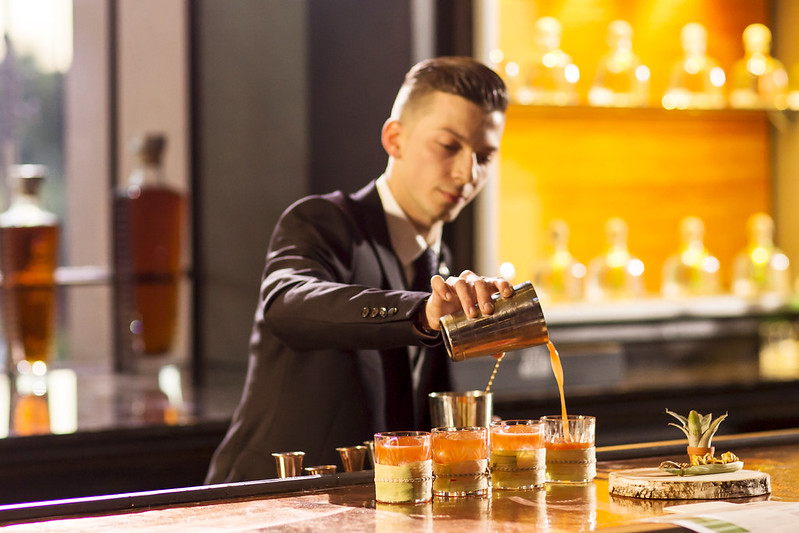 Having judged the UK heats, we’d already seen Mike McGinty’s presentation twice before. That’s not to say we’ve grown tired of listening to him talking about his drink made using Patrón Reposiado, camomile infused dry vermouth, grapefruit IPA, lemon juice and yellow bell pepper shrub. If anything, he brings it to life more convincingly each time. For the global final Mike woke up early to spend time watching and talking to the workers at the Hacienda – he’d created the cool and refreshing Bell of Jalisco with them in mind after all. Being in Mexico definitely brought the X-factor to his performance – delivering excellent chat, a mighty fine drink and assured knowledge of the brand.

Another fine presentation came from Brice Martaud representing France. Here’s someone who commands attention behind the bar – each flick of the wrist, every flourish of the shaker was balletic in style and mesmerising to watch. His drink, the Pimento Goloso a clever blend of Patrón Silver, Martini Bitter, cacao and pepper shrub and homemade corn syrup showed his culinary influences to the max. Perfectly balanced and beautifully executed, we’re predicting great things for Brice, expect to hear more about him very soon. 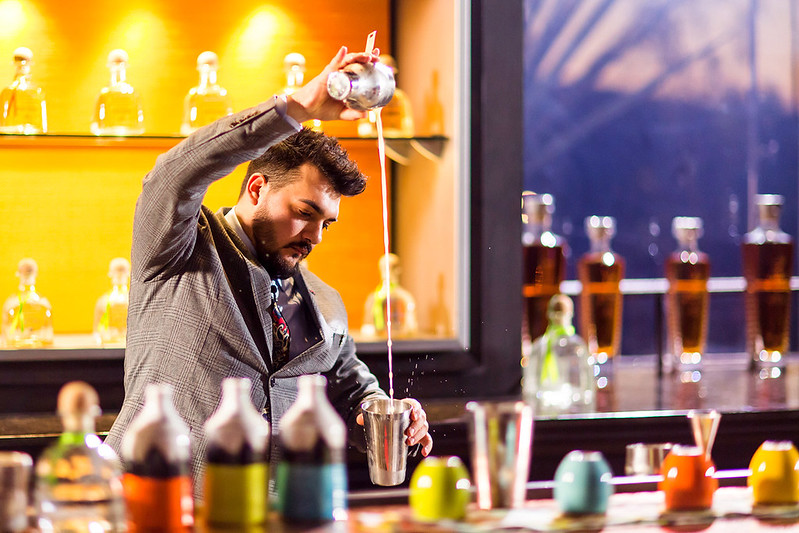 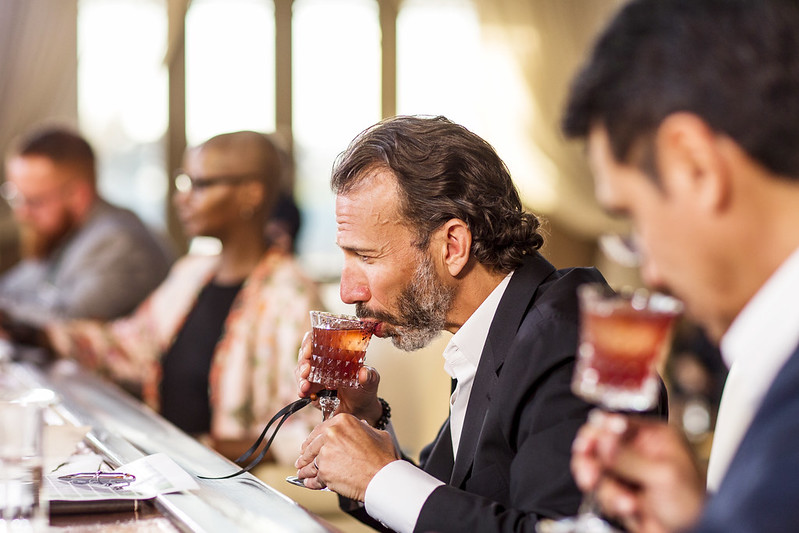 Top: Nicola Ruggiero (Italy); above: the judges at work

Flying the flag for Italy was Nicola Ruggiero. Again, every detail of his performance was carefully considered. The fact that he chose to hero Patrón by hiding all other ingredients in colour-coded ceramic bottles wasn’t lost on us. We also liked that each one was brandished with the name of his Patrón Atole cocktail. The blend of Patrón Silver, centrifuged corn, lime juice and cinnamon liqueur was carefully and very meticulously ‘thrown’ to add lightness and air to his drink. He then rimmed each of his coloured ceramic cups with dark salted chocolate before the liquid was poured in and topped with a corn biscuit. The judges were asked to prise themselves out of their comfy bar stools and join him on the floor where a specially branded mat had been laid out for us to sit and sip, along with mini versions for invited guests. 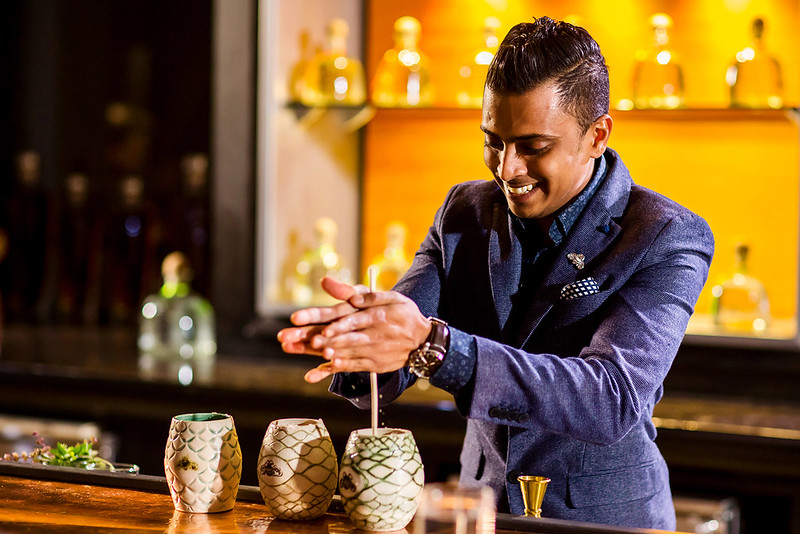 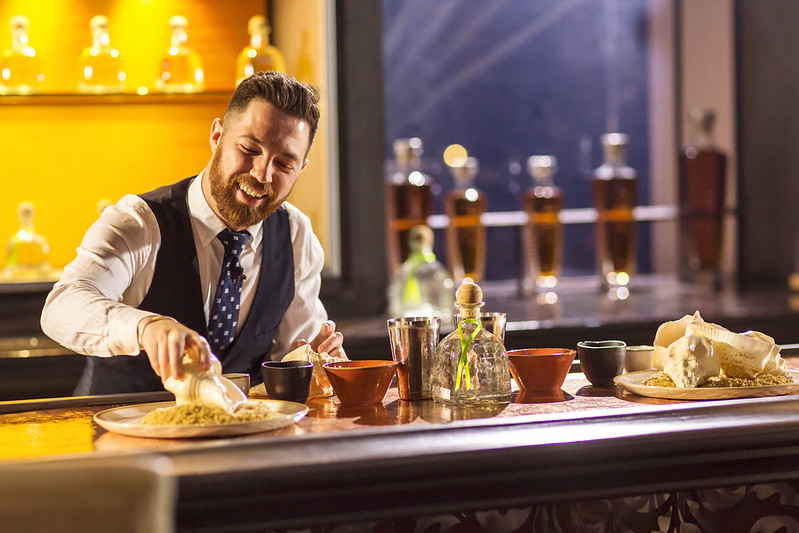 Next stop was UAE where we were treated to the deliciously fruity and fragrant Jalisco Swizzle, created by Sudeera Fernando. Sudeera referenced the sustainable practices at the distillery as the guide for his drink which was swizzled using crushed ice so there was no wastage from the discarded ice used during shaking. His drink was served in original ceramic vessels which he designed to replicate the close cut agave used to give Patrón tequila it’s super-premium taste.

Last in the line up was Nick Cozens repping Australia. His Song of the Sea cocktail was created with the beach in mind and had all of the visual references to transport the drinker there. A salted agave spray with added tequila was spritzed on to a primrose conch shell which was then dipped in dehydrated pineapple to recreate the crunch of sand. Patrón Silver, vanilla washed Lillet Blanc, lime juice, black pepper and coriander shrub, and pineapple juice were then shaken and added to the shell, then topped with salted agave air. 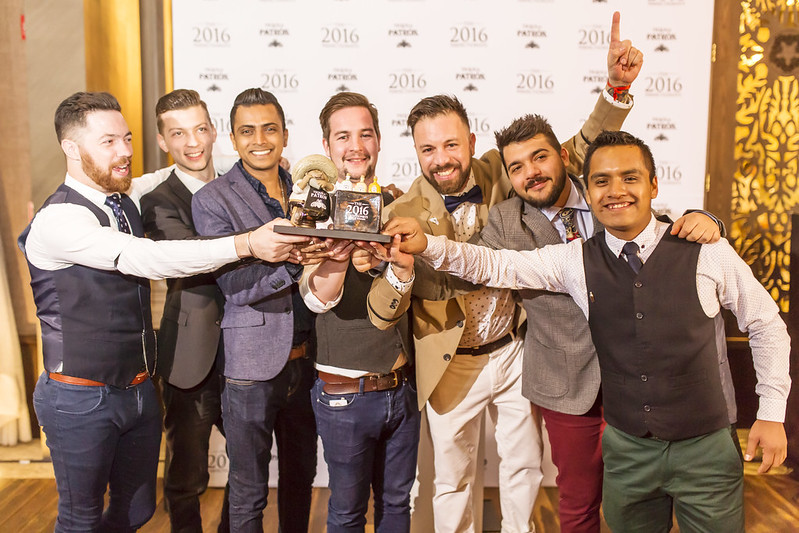 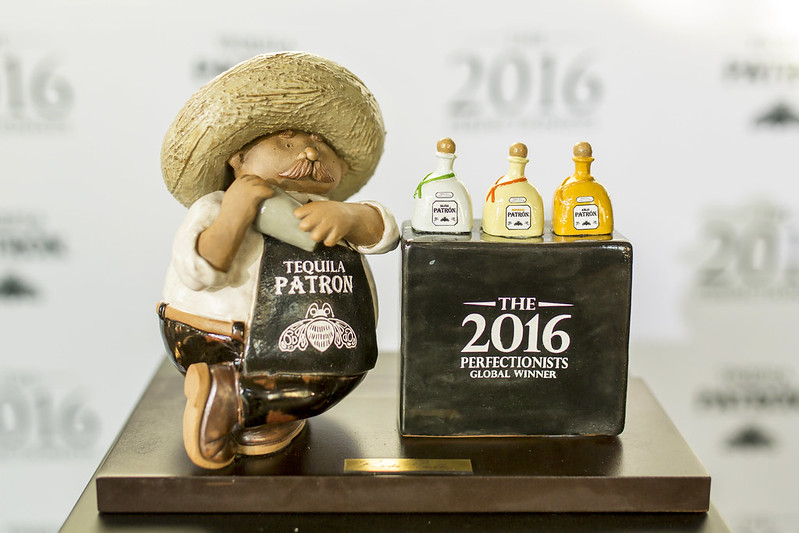 And with that, the bartenders work was done and it was down to the judges to decide whose cocktail, style and presentation highlighted their chosen Patrón expression to best effect. That accolade went to Mike McGinty – champion Patrón Perfectionist 2016 bartender and all-round top bloke. His prize, a specially commissioned trophy will be on show at his bar Voyage of Buck in Edinburgh. Call in and be sure to try his winning Bell of Jalisco cocktail while you’re there. London’s bars need you! Get set for London Cocktail Week